Martin Hellöre (1914–1992) was actively involved in club activities and sports but especially he is remembered  about his colourful travel stories which he also wrote in Tidskrift för Dövstumma and Dövas Värld (Finnish-Swedish Magazines of the Deaf).

Cycling to Stockholm in 1934

In the summer 1934 Martin Hellöre grabbed his bike and took a direction to Stockholm. The journey, altogether 2 000 kms, was to lead from Pietarsaari around the Gulf of Bothnia through Tornio to Sweden. The left-hand traffic caused some difficulties, and once he even was about to hit another cyclist, driving on the wrong side of the road. Nights he often spend in hey barns by the road. Many things seemed to be better in Sweden: there even was wheat bread which Martin had never eaten before. He also saw his first electric train in Luleå town.

On the road to Umeå he stopped a man to ask for directions. The man invited him to his house to consult a map. He was given provisions for the journey and a yellow band for his arm which was obligatory for the Deaf in traffic, ordered by the Swedish traffic law. Close to Umeå Martin stayed overnight by a Finnish family, the Jussilas, who were also Deaf. He was very surprised to hear that his hostess had already heard about his journey while visiting Finland. Martin continued another 19 km after Umeå but maybe for the tiresome journey he then, after pondering for a long time, decided to turn back and go home. After all, neither was the bike in a good shape anymore.

Cycling via the Baltic States to the Exposition Universelle, Paris, 1937

The Exposition Universelle in Paris, in 1937, was Martin’s next destination. The journey started in June and was to lead to Paris through the Baltic States. He spent his nights where ever he could: in the home of a local Deaf club chairman, in barns by the road, or with people he had met on the way. Estonia he crossed in two days. In Riga he met Latvian Deaf and visited the Riga Deaf club.

The trip to Paris ended at the Lithuanian border as the border guard did not let him pass through by bike but he should have taken a train. Martin didn’t want to give up his new bike – there was no one to buy it anyway – so he had to give up his dream to reach Paris and turn back to Pietarsaari. He cycled directly from Riga to Tallinn in 30 hours without rest. In Tallinn he took the steamboat S/S Suomi to Helsinki and was back in Pietarsaari just in time for the Midsummer’s night celebrations.

Going to the USA

Martin Hellöre was caught up in between the fighting great powers during the World War II on the way to the USA in 1941. An English warship stopped the ship sailing from Linhammar to Baltimore and forced it to Iceland where Hellöre was taken to a prison camp. Later he was taken to England with German prisoners. Martin was suspected on fraternising with Germans as there was a German stamp in his passport from the year 1936 when he had hitch-hiked to the Olympics. In opposition, Martin started a hunger strike. He was held captive for three weeks before he was released and could return via Norway to Finland. 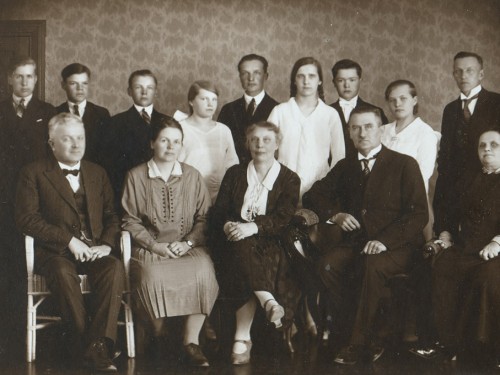 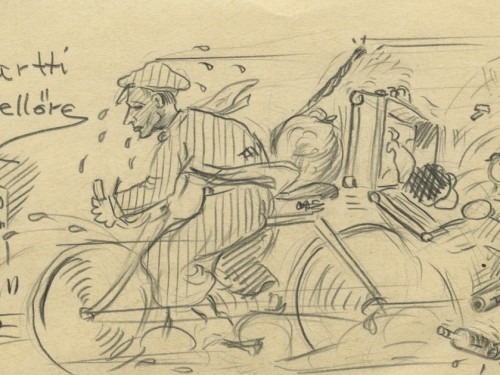