Rurik Pitkänen (1898–1966) worked in the Finnish Association of the Deaf for four decades and was an eager promoter of e.g. Deaf vocational education as a secretary, a travelling advocate and finally as an executive director. In the 1920′s and 1930′s he travelled across the country enlightening and lecturing and was known by virtually everyone. For years he was a board member in the Surdus printing house and during his time dozens of Deaf were trained and employed by the company. During his life, Rurik Pitkänen attended almost everything in the Deaf community, leaving behind him a strong spiritual legacy of the Deaf being able to maintain themselves. In his opinion, the Deaf had to trust their own skills and demand equal rights with the hearing in the society.

Rurik Pitkänen was born in 1898 to a farmer family in Siilinjärvi. He became deaf after a scarlet fever as a 9-year-old school boy and continued his school in the Kuopio Deaf School, getting his school leaving certificate in 1914.

Rurik studied printing likewise many other Deaf. In 1919, he started learning typesetter’s profession and continued his studies in Helsinki until 1924. Later, he complemented his studies with graphic course in Ateneum in 1923-1925, and after a few years got a foreman’s diploma, becoming Finland’s first Deaf foreman of a printing house. In the 1920′s and 1930′s he worked in the printing house as a typesetter and later as a foreman. As a sophisticated man, he specialised as a reviser of academic texts, a job which requires definite linguistic skills.

Rurik worked with the Deaf vocational education and employment on a grass root level. The printing business remained dear to him through his life as he sat in the board of the Surdus printing house from 1931 until his death. The Helsinki-based printing house Oy Surdus Ab, founded in 1929, can well be counted as one of the important professional and financial networks of the Deaf in the 20th century. Even most of the shareholders were Deaf.

The original father of the combined printing house and vocational school was Oskar Wetzell but he didn’t live to see the founding of Surdus. When Rurik began his career in the Surdus board in 1931, among other board members were e.g. Lauri Wainola and Eino Karilas. The last 10 years of his life Rurik was the chairman of the board. Dozens of Deaf got their vocational education in printing in Surdus and worked there until the 1970′s. 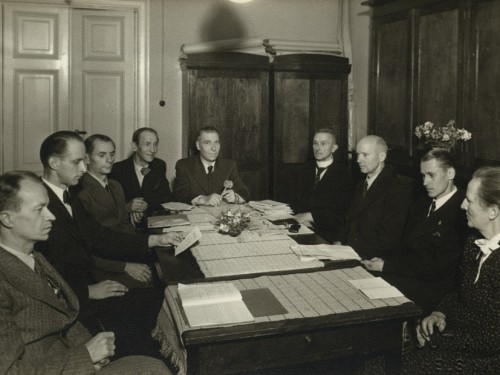