The contemporaries of Oskar Wetzell (1888–1928) considered him as one of the most prominent persons in the Deaf community. He was a multi-talent who became famous amongst the Deaf as well as the hearing, as an athlete and a magician. He represented Finland in two Olympics (1908 and 1912) in diving and won nine Finnish diving championships. He is an important part of the Finnish sports history and his example has inspired many young athletes.

Oskar Wetzell was born in 1888. His father worked first at the Sinebrychoff Brewery in Helsinki, later as a merchant. The boy became deaf after an influenza at two years of age and he was sent to the Porvoo Deaf School when seven years old. He is known to have been temperamental but obedient. He obtained a book binder’s profession in a Helsinki-based printing house Helsingfors Centraltryckeri, where he remained for the next 20 years. He was considered a warm-hearted, honest and socially skilled man.

Lively Oskar grew quickly interest in sports. In 1903, he started swimming in Helsinki Swimming Club and progressed fast. He specialised in diving, which was still rather unfamiliar in Finland those days. His speciality was the springboard but he attended also platform competitions. His first diving competitions at national level were in 1906, after which he got five championships in springboard and in platform diving.

Successful Oskar was chosen to represent the country in Deaf as well as hearing athletic events. In 1908, he participated in the London Olympics. In platform diving he was just a beginner and did not pass the first round but in springboards he made it all the way to the semi-finals. He participated the Olympics also in Stockholm, in 1912.

Next to diving, Oskar was interested in wrestling and gymnastics. During his 20-year career in athletics, he won nine Finnish championships and 70 other prizes. He participated actively also in club activities, and was one of the founding members of the Finnish Athletic Association of the Deaf. 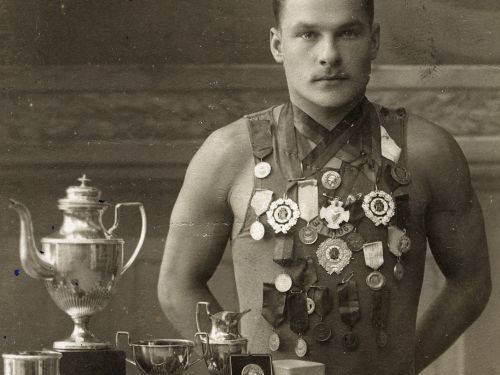